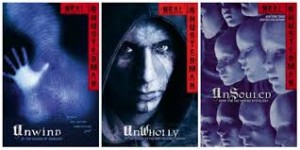 I have been reading the Unwind book series lately. This book is by Neal Shusterman. There are  a lot of surprising twists and turns. The book starts out in a setting in Ohio. The book follows three main people, Conner a boy who has anger issues and gets into a lot of fights, Risa a girl who has no parents and is a ward of state, and Levi a tithe who is someone who wants to be unwound because its part of his religion.

All three of these people are going to be unwound. Unwound is when you have either been a bad kid, there is no money for you such has your parents have no money or the state ward, or your a tithe then its your religion. Unwinding is when basically your parent or guardian don’t want you anymore.  What unwinding does is it puts your body in the divided state. The harvesters take piece by piece of your body apart, and give it to someone who needs it. For example if you have bad teeth you can get new ones from an unwind.

Conner just found at he is going to be unwinded, because he gets in a lot of fights. Once he finds out he is getting unwinded, he was really mad, so he is going to run away. Conner is going AWOL, this is illegal. The night he runs away little does he know he’s going to be traveling in a group  of three.

Risa is a ward of the state, the orphanage is having budget cuts so she will be  unwinded.  Risa plans on kicking AWOL. She boards a bus ready to be unwinded little does she know that there will be a crash with the AWOL Connor. Just like Connor little does he know she will be traveling  in a group of three.

Levi Calder is just your ordinary tithe.  It’s been part of his religion to be unwinded  and he will be when he turns age 13 he’s known it since he was a little boy. Levi’s ready for it though he’s excited he wants to be unwinded. Just like Connor and Risa though little does he know he’ll be traveling in a group with three very soon.

Connor is on the run from the cops he runs across the highway. Risa is on a bus ready to be unwinded. Levi is in the car heading to be tithed. Somehow though they’re all on the same highway. As Connor runs across the highway he sees Levi in the car heading to be tithed, he rescues Levi. Risa’s bus crashes she runs out the emergency exit. All three of them meet for the first time in the woods. They are now in a group of three.

I would love to tell you more, But you’ll just have to read the book to find out. I hope you give this book a chance. This is a very good book with lots of ups and downs and it’s good for anybody who loves books like the hunger games,because it’s about a collapsing society because of laws. Thanks for listening.